When the first Assassins Creed game came out in 2007, I was not too fond of it or any other games in the series. However, as I’ve gotten older, I’ve found myself returning to games that I previously disliked, such as the original Assassins Creed game in 2007. Back in the day, my impression of the Creed games was that they were “Copy-paste games.” That game was “Assassins Creed: Brotherhood,” and it was the only one I’d played at the time that I found myself liking. Afterward, I didn’t get back into Assassin’s Creed until I played and fell in love with Odyssey. We are not here to talk about it, though, as that is not the topic of discussion today.

This is the first series of reviews I’ll be doing on all of the mainline Assassins Creed titles.
To evaluate these games, I decided to go back to the game that, for better or worse, shaped the creed games into what they are now. In November 2014, “Assassins Creed: Unity” was released to mixed reviews due to its overwhelming buggy gameplay and “lackluster” plot, which alienated many fans from the Creed franchise.
A low point for the series was marked by the fact that, as a result of these events, this game and the ones that followed saw a significant drop in sales, prompting Ubisoft to reinvent the franchise. Was this game indeed that bad? Let’s take a look.

Arno Dorian is the game’s main character, and he is a nobleman of French and Austrian descent. Following the assassination of his father Charles in 1776, Arno was taken in by François de la Serre, the Grand Master of the French Templars, who raised him as his own. In 1789, Arno was given a letter to deliver to François, but he chose to leave it in his office instead of seeing Elise, François’ daughter. The latter has recently been initiated into the Order. Arno subsequently discovers François has been murdered and believes he saw the perpetrator. After being framed for the murder, he is imprisoned in the Bastille, where he meets and befriends Assassin Pierre Bellec, who is also a prisoner. After escaping from the Bastille during the Storming of the building, Bellec invites Arno to join the Brotherhood.

Arno’s journey begins in Versailles when he is a youngster, although he spends most of the story in Paris. It starts on the eve of the French Revolution in 1789 and continues until the Thermidorian Reaction in 1794 when he embarks on an adventure in Paris. The action takes place in the current day, with the Assassins contacting the player and soliciting their assistance in exploring Arno’s history and assisting in the present.The emergence of the Brotherhood of Assassins during the French Revolution is shown in cooperative multiplayer missions. That’s right! THIS GAME HAS CO-OP! 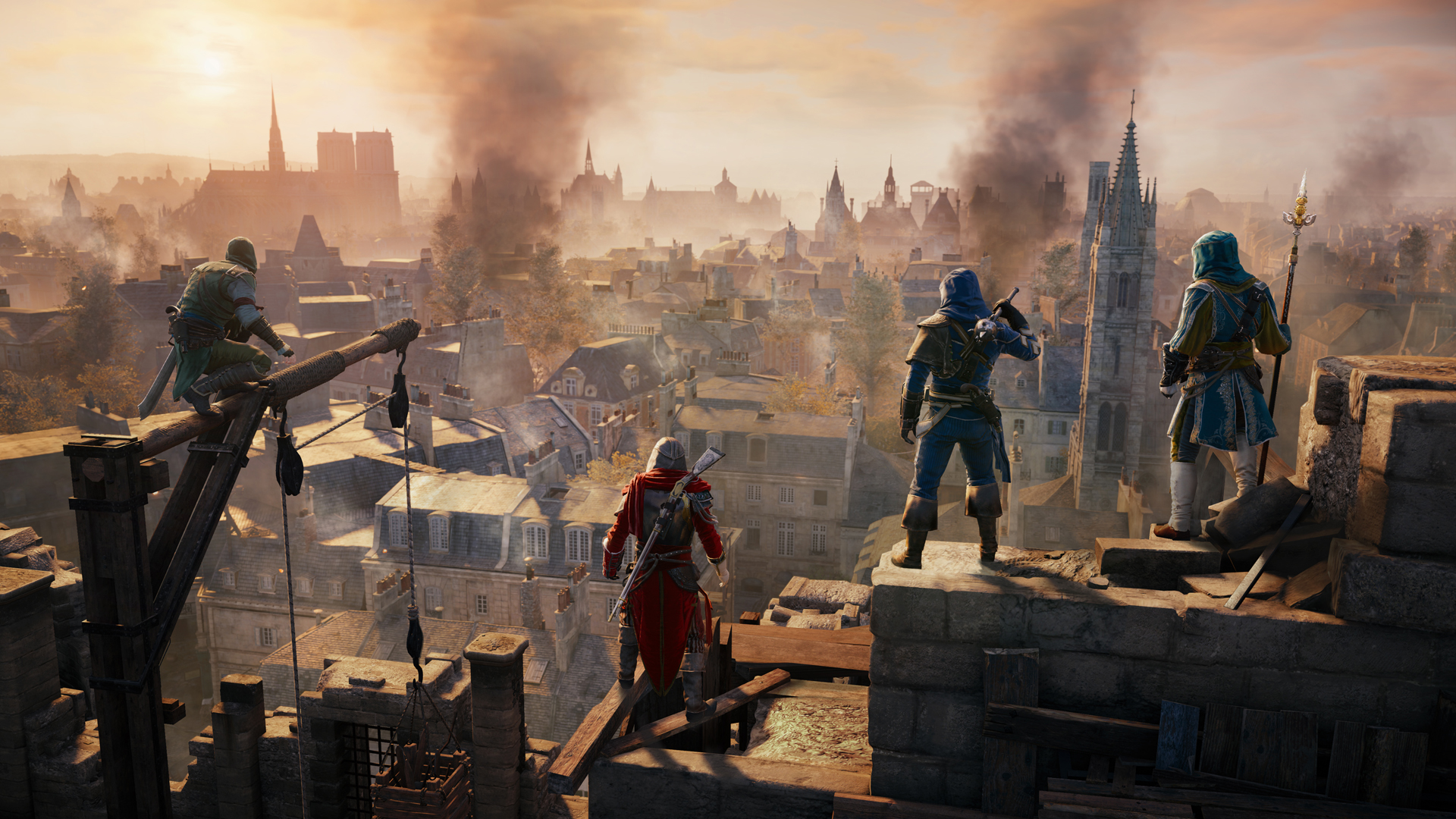 In addition to customizing their weapons and looks, the Assassins can use their experience points to specialize in one of four distinct specialties: “Melee” (offense), “Health” (defensive), “Ranged” (navigation), and stealth. Arno, for example, can be armed with Eagle Pulse, which allows him to determine how many guards are present at an area where he wishes to infiltrate before proceeding. Like other skills, it may be increased with experience points at the player’s option, much like any other talent. He can also learn to use disguise to avoid being apprehended by pursuing guards. Given that the player’s ultimate goal is to become a Master Assassin, the player will increase all of Arno’s abilities.

This game represents a significant advancement in customization!
When it comes to gameplay, it ends up being your standard Ubisoft collection gameplay mixed in with older Assassin’s Creed gameplay elements such as dodges, perry’s, and dancing about your opponent till you win the fight. As with all Assassin’s Creed games, it contains free-running parkour that allows you to scale buildings and discover new locations in which to role-play your Assassin. In terms of the plot, it was quick and digestible for what it was. I like seeing more CREED in Assassin’s Creed, as it appears that you don’t get to see much of how they function in the games in their usual form. Outside of present-day segments that allow you to take a break from the Assassin’s history and see the everyday world, the present-day portion of this game is exceptionally dull and lackluster; you don’t play as a unique main character, but rather as “Yourself,” a gamer who relives the Assassin’s life event’s; however, the story is generally enjoyable.
Each mission ended with me purchasing new equipment to make myself more lethal and mending structures and receiving in-game money for my exploration, which proved that spending my time would pay off in the long term. It’s a fun gameplay loop that you’ll appreciate.
Taking this as a starting point, I will work my way backward, looking at the older Assassin’s Creed games and what they have to offer before moving on to the more recent Assassin’s Creed games. Keep a close watch on Nexev!